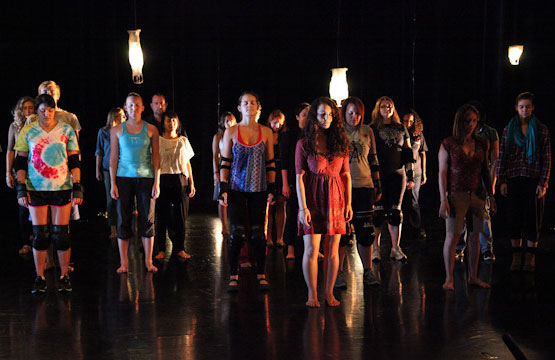 
During the two MANCC residencies that preceded the world premiere of Niiguni, Emily Johnson worked with local Tallahassee affinity groups.  Johnson and the participants generated material for Niiguni by finding a common gesture related to their interest.  Johnson utilized the groups to form a framework for the piece, a layer on top of an already existing dance.  Through each group’s presence, then absence, the space is somehow altered.  Johnson explains, “There is this idea of place holding everything—things that happened before, people that used to be here but now are not, everything that is happening right now, and everything that will happen later. All of our cells and molecules sharing the same space. The memory of one person and the next at the same time.”

For the performance of Niiguni, Johnson worked with five local groups including dancers from FSU’s dance department, a group of yoga teachers and students, the Tallahassee Roller Girls, a group of professional care givers from Florida State’s Communication Disorders department and Art Therapy program, and a group of Architectural Design students from FAMU.

The contributions from each group were woven into five different sections of the piece and all forty participants took the stage together near the end of the premiere.  In reflecting on the experience of participating in Niiguni, yoga teacher Javier Betancourt writes, “There was a moment during the first dress rehearsal for Niiguni where the yoga teachers were standing behind Emily in a calm line doing pranayama breath-work and she was addressing the rest of the group of community performers...she was talking about creating a meditative moment by connecting with the breath and feeling like their feet actually had roots and then became part of the greater earth below...for me that was the moment that defined the Niiguni experience...in no other dance piece had I been moved in the same way as both participant and observer. It was a moment filled with clarity and a serene presence.”